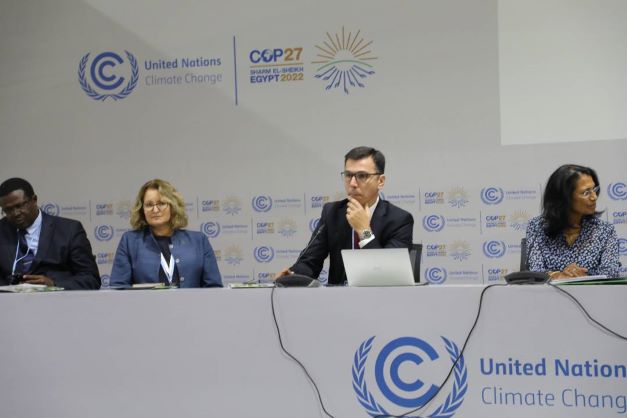 In line with efforts at aligning ambitious climate targets with the realities of food-insecure and fragile states in Africa, Technologies for African Agricultural Transformation (TAAT) held a side event which brought together a host of Food Systems groups attending the 27th Session of the Conference of the Parties (COP27) to the United Nations Framework Convention on Climate Change (UNFCCC) in Sharm El-Sheikh, Egypt.

With a focus on “African Imperatives of Resilient Water-Energy-Food Systems under a changing climate”, the side event explored vistas for an integrated and holistic nexus approach to Africa’s food systems, energy access and climate adaptation. The evolving role of partnership, research and innovation in food, energy and water systems was considered critical elements of the efforts needed to implement the Paris Agreement.

The side-event equally outlined perspectives and solutions from interventions such as the African Emergency Food Production Facility (AEFPF), African Activists for Climate Justice (AACJ), and the Advance Climate-Smart Aquaculture technology (ACLiSAT) as opportunities for a food-secure Africa under a changing climate. Panellists from various backgrounds weighed in on the solutions presented in an engaging “talk show”-format discussion.

Dr Beth Dunford, the Vice President in charge of Agriculture, Human and Social Development at the African Development Bank, in her opening remarks, stated that a holistic approach involving water, energy and food systems must be considered to solve the food insecurity issues across Africa.

Represented by Dr Martin Fregene, Director of Agriculture and Agroindustry at the bank, Dr Dunford added that “the agriculture sector is the economic and social backbone of approximately 500 million smallholder farmers in developing countries, making the sector the largest source of incomes, jobs, and food security”.

“Hence, it is crucial to ensure sustainable food production systems and implement resilient agricultural practices that increase capacity for adaptation to climate change, droughts, and floods. Doing so can not only help to promote food security but also lessen the impact that climate change and extreme weather events have on escalating social conflicts and causing forced migrations,” she said.

It is in line with this imperative, she continued, “that the African Development Bank, through its TAAT programme, has promoted access to climate-resilient seeds through a Regional Food Technology Delivery Infrastructure (RTDI) made up of a partnership involving international agricultural research organisations, the NARS and NARES, NGOs, and the private sector, especially the seed companies.

“From evaluations carried out by an independent evaluator, the TAAT programme has delivered heat-tolerant wheat varieties, drought-tolerant maise varieties, and climate-smart rice varieties to 11 million farmers and increased crop production by an estimated 25 million tons of additional food. Indeed, this is a credible pathway to feeding Africa under a changing climate,” she added. 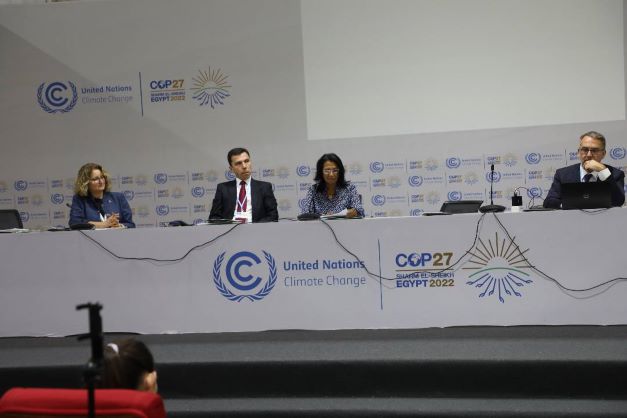 Dr Claudia Sadoff, Executive Managing Director of CGIAR, averred that water, energy and food systems are tightly interconnected but that “these systems are faced with pressures of varying natures and levels of urgency which need to be better understood, especially as nations work toward achieving the UN 2030 Agenda’s sustainable development goals by 2030”.

“CGIAR has been able to improve climate resilience in farming communities in 21 countries through the establishment of Climate Smart Villages which test and scale resilient food system innovations. We have also contributed to building a resilient food system in the continent by increasing rice yield in 13 countries in sub-Saharan Africa by 0.5 to 1 ton per hectare and profitability by US$200 per hectare through a smart mobile crop management tool called ‘RiceAdvice’,” Claudia highlighted.

While wrapping up comments at the event, Dr Essam Mohammed, Director General at the WorldFish Centre opined that climate-related changes in weather patterns, unreliable rainfall and the effects of drought threaten Africa’s agriculture. “Moreover, some of the major food crops in Africa are “vulnerable to temperature increase, rainfall changes, and carbon dioxide increase”, he said.

In the harmonised recommendations presented by Dr Chrys Akem, TAAT Programme Coordinator, that water, energy and food systems be considered an interconnected trajectory on the path to overcoming hunger or malnutrition in Africa and building resilience to climate change.