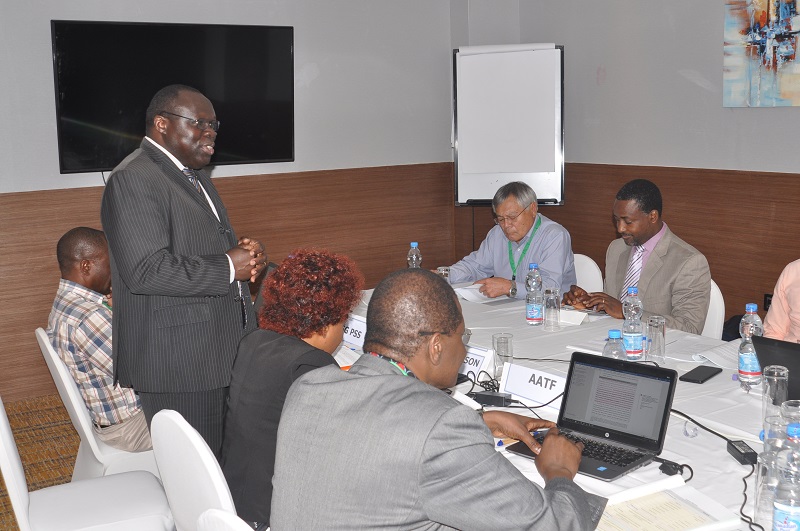 Farmers in the East African region are staring at starvation as a result of pest related losses in maize yield running into millions of USD. Emerging pests such as the Fall Armyworm (FAW) pose a serious threat to crop productivity in Africa, which will further threaten food security.

To mitigate these negative impacts, experts advocate for multiple pest management strategies blended well into an IPM plan. This could include the use of Bio-Pesticides and biocontrol agents that are able to effectively control FAW.

Fortunately, the Policy Compact of Technologies for African Agricultural Transformation (TAAT), supported the process of developing Regionally Harmonized Guidelines for the Registration of Bio-pesticides and Biocontrol Products which were adopted by the Sectoral Council on Agriculture and Food Security (SCAFS) of the East African Community (EAC) in September 2019.

This support was made possible through a financial support from the United States Department of Agriculture – Foreign Agricultural Service (USDA-FAS).

Sponsored by the African Development Bank (AfDB) as part of its Feed Africa Initiative, TAAT’s main objective is to improve the

The programme increases agricultural productivity through the deployment of proven and high-performance agricultural technologies at scale along selected nine commodity compacts such as high iron beans, sorghum and millet, maize, rice and wheat. Others are cassava, orange-fleshed sweet potato, livestock and aquaculture.

The compact operates to strengthen economic, trade, and institutional policies that contribute to higher productivity, competitiveness, and processing intensity across value chains and agro-ecological zones by working closely with national and regional partners.

The guidelines, adopted by the Sectoral Council, are meant to facilitate registration of Bio-Pesticides and Biocontrol agents for plant protection, facilitate the designation of testing centers for pest control products and facilitate the establishment of mechanisms for handling confidential business information (CBI) protection.

With these three guidelines, testing and registration of biopesticides across the region will be made easier because the data used for registering a product in one country will be acceptable in other EAC partner states.

This shortens the period it takes to register a product hence making these products accessible to farmers across the EAC region.

According to Hon. Christophe Bazivamo, the deputy secretary general in-charge of the productive sectors at the EAC secretariat, the adoption of these guidelines will have far-reaching impacts even beyond the EAC region.

“These guidelines are of critical importance to the EAC partner states and will help in the fight against emerging pests such as the FAW and also boost trade relations at continental level as African States seek to implement the African Continental Free Trade Area (AfCFTA),” Hon. Bazivamo said.

The adoption of these regulations in addition to those that govern the testing and registration of conventional pesticides that were adopted earlier-on is already bearing fruit.

Pesticide regulators in the EAC region already started receiving dossiers for testing of promising pesticides for the control of FAW from producers/marketers.

Dr. Paul Ngaruiya of the Pest Control Products Board (PCPB) in Kenya avers that trials for one product were already concluded by December 2019 while season one trials for a second product were underway.

Similar testimonials were received from Uganda, Tanzania and Rwanda, where trials for an additional three products were underway.

“We are now conducting trials under the harmonized guidelines. Due to the possibility of sharing efficacy trial data, this is going to save the time we need to register a product in the region.” Indicated Mr. Alfred Muzira, who is the Registrar, Crop Inspection and Certification at the Ministry of Agriculture, Animal Industry and Fisheries in the republic of Uganda.

However, the impact of these regionally harmonized guidelines will only be felt if the EAC partner states will accelerate the process of their domestication and implementation.

TAAT Policy Compact affirms its determination to provide technical support to the processes that facilitate the domestication of the regionally harmonized regulations such as technical support in conducting efficacy and maximum residual level (MRL) trials to ascertain the effectiveness and safety of the pesticides, development of protocols to guide the trials and facilitating the establishment of an online platform for information and data sharing among the pesticide regulators in the region.